As the RSNO celebrates its 125th Anniversary, we are celebrating many musicians who have played an important part in the orchestra’s life. On 17th-19th March in Glasgow/Edinburgh/Aberdeen  we hear a joint commission (with the RLPO and Bournemouth SO) by Sir James MacMillan, a composer who has frequently featured in our concerts since the 1990s.

The first MacMillan piece I played with the orchestra was “The Berserking” for piano and orchestra. I confess to having more than a passing interest in MacMillan’s music at this point: as a composition student at Manchester University I had missed studying with him by one year… Talk about bad luck! What immediately grabbed me about his music was its passion, the wide range of colour he draws from his ensembles and the rhythmic vitality. There have been many emotional journeys for me in this music, not least our performances of “The Confession of Isobel Gowdie” on tour in Sweden in 2004.

As I’ve delved further into MacMillan’s music, I’ve increasingly been drawn from his orchestral to his choral music, which for me is where he is at his most engaging. I remember hearing the beautiful “Strathclyde Motets” at the Edinburgh Festival two years ago interspersed with music from the Renaissance, and my YouTube discovery (I did buy the CD afterwards!) of “Tu es Petrus” for choir, organ and brass written for the Pope’s visit to Westminster Cathedral in 2010. Go and listen to it – it’s mind-blowing.

MacMillan isn’t just a man for the big occasion, though. He is equally at home writing for amateur groups: “The Galloway Mass” for congregational singing springs to mind and it has been announced recently that he is writing a piece for the GSA choir to sing at the Mackintosh Building’s reopening. He is a passionate advocate for music education and in 2014 he founded “The Cumnock Tryst”, a four-day music festival based in the town where he grew up. MacMillan himself acknowledges that if it weren’t for the musical experiences he had there as a boy, he may not have become a musician.

Twenty years after my first encounter with MacMillan’s music, I still wish so much that I’d coincided with him at Manchester University. I’m sure I’d have learnt much about composition, but more than that, as a small-town girl myself, I share a belief with him that music-making of a high standard is for everyone, everywhere.

The recent RSNO programme featured my reflections on playing the Bartok Concerto for Orchestra. If you want to see it, click here:

I promised you the article I wrote for the RSNO’s season opener. It was an exciting concert and James MacMillan’s Third Piano Concerto went down really well  with the audiences. Personally, I was absolutely blown over by it. I’ve always been a MacMillan fan and it’s really interesting to see his style maturing. When I wrote the article, I hadn’t heard the piece, but I think this is definitely one that’ll stay in the repertoire.

Hopefully my “Insight” article helped people understand what it’s like for an orchestra to learn a new piece:

It’s been a busy summer for the RSNO. Highlights have been our performances at the BBC Proms and the Edinburgh International Festival. These performances were particularly special as they included world premiere performances of Naresh Sohal’s “Cosmic Dance” in London and Tod Machover’s “Festival City” in Edinburgh. We continue the first performance theme tonight with the UK premiere of James MacMillan’s Piano Concerto No. 3, so I thought I’d share with you the performer’s perspective on a new orchestral work.

The first step with a new piece is always to get a part from the orchestra library. We’ll come to the work with varying degrees of knowledge. James MacMillan’s music is, of course, familiar to us, so we have some idea of what to expect:  likely tempi and styles of playing. Sohal and Machover were unknown quantities to us. The latter included lots of special effects on both conventional instruments and electronics. Despite working with Machover back in May, it was hard to imagine from the viola part alone how these effects would fit into the whole. At this stage, it’s really a question of getting notes under fingers.

And so onto the rehearsal phase. There’s always a sense of anticipation before rehearsing a new piece. Often it’s hard to understand a piece on a first play-through. We don’t have any “gathering points” if something goes wrong and sometimes it’s hard to work out who has the important line. Gradually, however, we find our way around the piece. I love seeing how it grows into something coherent. As you become less fixated on your own part, interesting lines and sounds emerge as we learn what material is important and when we need to accompany.

The audience, too, has a certain sense of anticipation before a new piece. That was particularly true with Machover’s “Festival City” as they, too, had contributed to the piece by sending sounds of Edinburgh to the composer. A premiere requires so much concentration. We have one shot at performing a piece we only played together for the first time a few days previously! We owe it to the composers to give you, the audience, the best possible experience of their work. Not everything we play will pass into the repertoire – you only have to look at the back of a 19th century orchestral part to see how much music passes into obscurity – but now and again you get to play and  listen to a piece that you know is going to stand the test of time and that’s exciting! 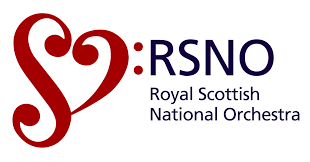 As well as writing and translating, I also work as a full-time viola player with the RSNO. Part of my work there involves writing programme articles and giving pre-concert talks.

Now I’ve completed my MA I have a little more time available to do this and right now I’m thoroughly enjoying learning more about unfamiliar pieces, such as Messiaen’s Les Offrandes Oubliees, which we are performing in November. For more details, see the RSNO website. For Edinburgh:

Sometimes the hardest part is deciding what angle to take on a piece. This is particularly true when I’m writing my “Insight” articles for the programme, as these are more about personal reflections on a programme or piece, or the performance process from the player’s perspective. I was asked to write something on Vaughan Williams 5 and readily accepted, as it’s a piece I love, only to have to think long and hard about exactly how I was going to articulate that! You’ll have to wait until November for that one, but later this week I may share the contents of my article for the season opener!

After taking a big breather after submitting my Masters Dissertation, I have made the decision, with support and encouragement from my friends in the Wagner Society, to carry on translating Oper und Drama.

Part III is most familiar to me, so I plan to continue with Chapter V, the other chapter I considered doing for my dissertation. I will update you with progress!

In the meantime, I am also busy writing an article for the RSNO for their Vaughan Williams 5 concert programme.